In Search of a letter from Richard Williams

The Williamsburg sesquicentennial was of course the right time to come for a visit to attend events and to meet cousins and others I had corresponded with in Iowa County, but I had also intended to do some research and have a look around the county. When I crossed the western border of Iowa County, the degree to which I had anticipated solving a particular research mystery revealed itself. With a few hours to spare before I needed to check into my accommodations for the next seven days, I felt compelled to steer the wheel of my car toward the Victor exit off of I-80. As a curious webmaster for the IAGenWeb site for Iowa County), I wanted to see Victor as well as other towns in Iowa County, but also knew the road connected with highway 6 toward Marengo, the location of the county courthouse and my long anticipated destination; I hoped to find a letter from my great-great-grandfather Richard Williams.

Next stop, Ladora. Since the town sadly no longer has much to it, other than a few neat old buildings along the road, I only made a quick stop to take a picture of the beautiful Ladora Savings Bank with it’s amazing lamps hanging inside. The building stands as a monolith with little else surrounding it, but is a shining star of the town now and for the future, as I noticed it was undergoing a renovation. The bank has been on the National Register of Historic Places since 1990. I wondered what the building would house once it was renovated. I found out later from an article in the Williamsburg Journal-Tribune and from the new website for the bank, Ladora Savings Bank. 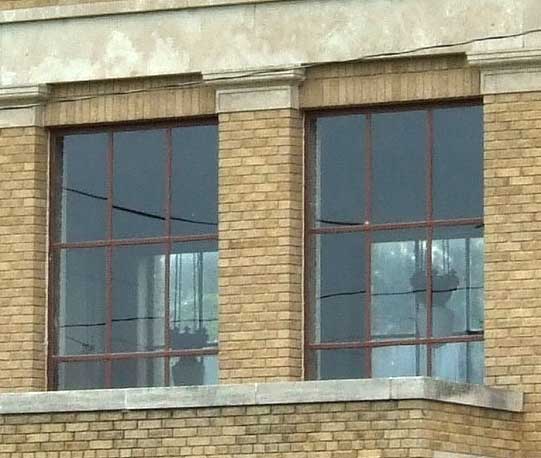 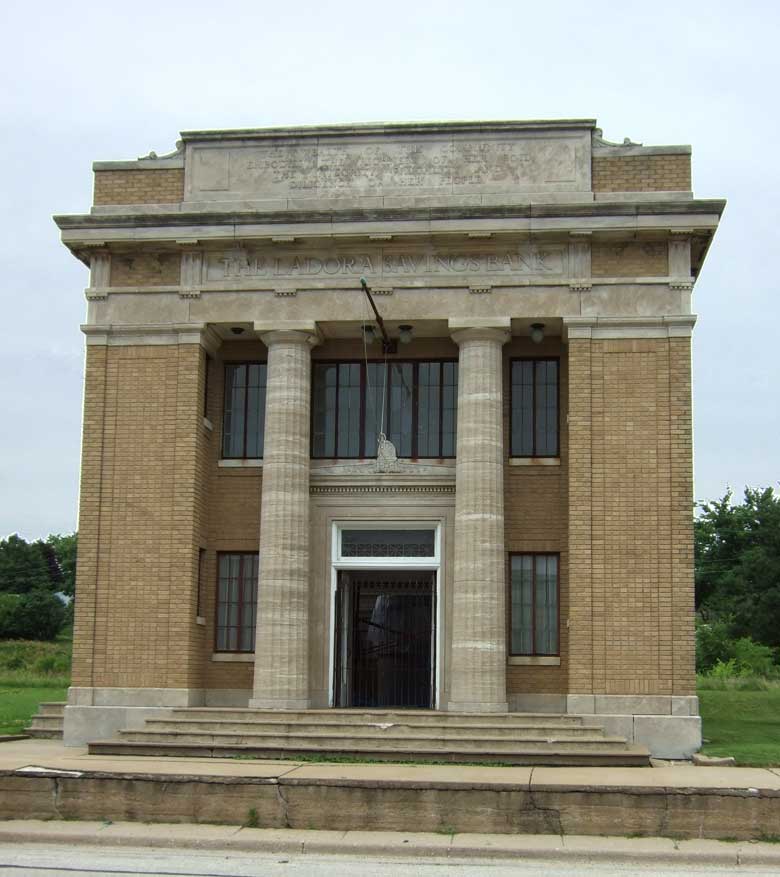 Panel relief above "The Ladora Savings Bank" states: “The Wealth of this community embodies the richness of her soil, the integrity, frugality and diligence of her people.”

Search of the mystery letter begins

I had been wanting to visit the Marengo courthouse in Iowa County, Iowa for a long time. This has to do with a photocopy of a letter that I found in my uncle David’s family history binder a few years ago. My uncle and his genealogy friends discovered the letter way back in the summer of 1986 when they stopped in Iowa County, but no one remembered where the letter was found. The letter was written in Welsh and signed by Richard Williams, my Great-Great Grandfather. You see, prior to this it was thought that Richard Williams could not read or write, as official documents were found where he signed with an “X”. I talk about how it was not unheard of for a literate person to do this, and how strange it would be for a Welsh Independent not to read and write, in an article in The History of Williamsburg, Iowa, Volume II-Genealogy, Richard Williams – From Wales to Williamsburg. A translation of the letter revealed that it was written to a brother, offering a piece of land to him and indicated a draft for $100 was received and being held for him. Richard Williams died soon after the letter was written, so my thought was that the letter was brought back and offered as proof by Richard’s brother of money owed to him from the estate. In the letter, Richard named another brother, William, but did not name the brother who the letter was written too. By finding the location of the letter, I was hoping I would find more information about the unnamed brother. Finally, I was about to begin my long anticipated search.

I thought the letter might be found in the courthouse because of it’s contents. I did not look at the probate records first since I thought those had been looked over several times through the years by other family members and researchers. Instead I started with court case documents. Unfortunately, these documents do not extend as far back to 1860. I could not find the letter there, but found a few interesting items, which I will look into at a later date. One such entry in the Appearance

Docket, Book 1 (1861-1869), no. 185, shows a “Roger Jones et al, Trustees of Welch Church vs John Hughes Administrator of Est of Richard Williams decd, Sept. 4th 1866“. Richard Williams probate was open long after his death to settle all his business dealings, so this wouldn’t have piqued my interest had it not been for the name, Roger Jones, and the Welch Church. I find it interesting that there was only one Roger Jones in the area that I know of, and that very same Roger Jones helped to start the Welsh Calvinistic Methodist Church a couple of years after the date of this petition. The Congregationalists (the Welch Church) and the Methodists were two very different churches among the Welsh. I love a good story, so I’ll have to follow up on this. The problem was, the documents that this Appearance entry refers to would not be accessible until winter-time or beyond. The old court records were being stored until retrofit work on the courthouse was completed.

My time ran short, so I decided to pick-up where I left off the following day.

The next day, after a stop at the Williamsburg Historical Commission building on the beautiful square to “check-in” and at the sesquicentennial office for a short visit, I headed out to Marengo again to resume my search.

This time I requested Richard Williams’ probate papers. The thick packet was brought out and I asked if I could take digital photos of the pages without flash. After a puzzled look from the staff member, Clerk of Court Sheryl Neal, came out and said she didn’t see why not. I’m sure such a request doesn’t often come up, but it should. Photocopying exposes these 150 year old documents to very harsh light, further fading the ink and deteriorating the paper. Taking a photograph with flash would do the same thing but perhaps with slightly less damage. After jocking around the table trying and failing to get a good angle, so that glare from the overhead light would not obscure the surface of the documents, Sheryl once again came over and asked if I would like to take the packet to the corner room where I could use the natural light coming through the windows. I felt relieved. With the room in the north-west corner and the lights out, the conditions turned out to be perfect; no sun coming in at that direction and no glare, just a low-level wash of natural light. I was so appreciative of Sheryl’s help.

There are a few benefits of digital photography that have to do with saving paper and money, but other than saving these papers from light damage, the other reason was dictated by the fact that the probate packet was very large. I simply couldn’t spend all day long looking at each slip of paper, trying to decipher the old handwriting on-the-spot looking for all the clues. Being able to photograph, allowed me to copy each and every page front-and-back so that I could take them home and peruse the documents in a more leisurely and thorough way. So with my new Fujifilm FinePix F31fd camera, purchased just for such an occasion, I went to work. I chose this camera for it’s low light capabilities and it’s compact size, which means I could use it indoors without flash and have it in my pocket with me at all times.

Because of the size of the probate packet, time constraints and the desire to capture every bit of paper for future reference no matter what I was truly searching for, I didn’t bother trying to find the Richard Williams letter right away; instead I started photographing each page from the beginning.

Making my way through, about to take the 45th image, low-and-behold there was the letter in it’s original handwritten form, save the punch-hole to keep it in the ledger-style folder (for shame to be punching holes in these 150 year old documents). I paused in disbelieve that I had actually found the

"William your brother sends his kind remembrances to you. I am, your faithful brother, Richard Williams"

original letter after the 7-odd years since I first saw the photocopied letter. The promise of discovering the brother who delivered this letter back to the place from whence it came, became real. I took a moment’s pause to mark the occasion. The several pages before and after the letter did not have correlation to the letter so, despite my significant curiosity, I had to plow on and finish photographing the rest of the probate papers without discovering the rest of the story.

An important lesson: We need to document our sources!

Back at the layer to look at the booty

After a wonderfully rewarding and busy trip (perhaps more adventures to document) I returned home nine days after I left for Williamsburg. Time to sit down and look over the 160 or so images of Richard Williams’ probate.

As I made my way through, I saw interesting tales of an enterprising man unfold. He had so many dealings with people that I find a veritable whose-who list of people in Iowa County and beyond. There is so much to pour over, including one of many promissory notes dated from May of 1855 appearing to be written in Richard’s own hand and in English! This from a man who signed with an “X”? Of course I found several other additional notes where he signed his name.

Finally, on the 41st image into the probate papers, I read this:

'I John Jones on oath say that about the 1st day of May AD 1860 I sent to my brother Richard Williams One hundred dollars as by his letter hereto annexed marked "A" ...'

There it was, staring right at me. The promise of finding the brother’s name was fulfilled. The brother, to whom Richard’s letter was written, was John Jones. This affidavit from John, even confirms it’s correlation to Richard’s letter. My jaw dropped. And what! Now, I have to track-down a John Jones; Jones being the most common surname in Wales (followed only by Williams)?

The Jones surname could be due to two possibilities: the first would be a remarriage of their mother; and the second would be the usage of patronymics, which died out in most of Wales by the 18th century, but was still sometimes used up to the middle of the 19th century in Northern Wales where are ancestors come from. I don’t think it was come for one child to take the forename of his father and not the other, so we could still be looking at a remarriage with or without the use of patronymics.

The letter from John Jones shows that he lived in Rutland County, Vermont, a place where the Welsh immigrated to work in and around the slate mining industry located there. Looking at the 1860 census, I find 6 John Jones born in Wales living in Rutland County. Now which one is our John Jones?

oldest one…A shot in the dark.